There seems to be a never ending battle against censorship on a certain social network… Let’s call it from now on by it’s Latin name faciem liber (or should we called it “Fascist No Liberty”? ) now this particular social network has of late been removing Nudism pages, then on appeal sometimes if they are lucky they will be reinstated, but a few have been totally removed, never to be seen again, for what? the cardinal sin of showing a nipple or a butt cheek, or even for “hate speech” with no explanation… 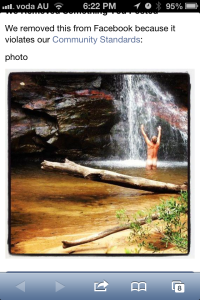 Nudeyman’s butt… offensive to the community

My article on “Community Standards” http://goo.gl/VbISM5

In my Australian Naturist News page’s case I have been lucky to only suffer a 24hr suspension so far, I have changed my page to 18+ (and lost about 100 likes when I did it) as well as using plenty of censorship to cover the offensive bits.

“Censorship sucks, let’s run into the water & wash these banners off!”

Other pages have not been so lucky, in no particular order we have:

All-Nudist has had pictures removed, been banned for various times and the last time was 30 days for posting a link to an article about nude Yoga on his website with the link still up!
http://goo.gl/BB3xqK

The Naturist Page, banned, had his page removed, started again, then banned and has now abandoned faciem liber for Twitter.
http://goo.gl/azWSuf

Felicity Jones from Young Naturist’s America has fallen foul many a time and she has created a page to display the banning’s.
http://shitthatgotmebanned.com/

Stéphane Deschênes from Bare Oaks Naturist Resort in Canada has had paid advertising request’s denied as well mentioning the censorship a few times on his podcast the Naturist Living Show.
http://www.naturistliving.bareoaks.ca/2013/11/womens-relationship-to-their-bodies-and.html
http://www.naturistliving.bareoaks.ca/2013/10/standup-comedy-exposed.html

Spencer Tunic has copped his fair share of angst as well.
http://goo.gl/iZSvOz

Plus I’m sure many many more I’m not aware of… as well as the countless breast feeding, body painting, artistic nudity pages….

Various page owners, including myself have pointed out the double standards on faciem liber with non sexual Nudey pages getting hit, yet overt sexual pages brazenly flout the regulations despite being reported multiple times by many people, yes it has been pointed out that we are just as bad as those reporting the non sexual pages, but the thing is our pages are not pornographic!

Recently I tried to take out a paid advertisement on faciem liber, yes sounds hypocritical but I have in the past used the “boost post” function as well as the paid advertisement campaign with great success, in fact last year I promoted the Sydney Skinny event which resulted in my pages event I created taking over from the official pages event (oops) but the promoter of the event (Nigel Marsh) who I met in person during the Sydney Skinny was not worried that I had “stole his thunder” in fact he shook my hand and thanked me for helping out, anyway back to the paid ad I attempted, the post in question was from the Body Image movement which was founded by Taryn Brumfit and she had a wonderful image of two breast cancer sufferers at the 2014 Sydney Skinny…

Link to original post on the Body Image page:
http://goo.gl/cdhwLC

I wrote an article about the Body Image Movement here: https://nudeyman.com/its-quite-ironic-i-think/

I appealed against the decision and said this:

“Why was my ad denied as being an ad for adult products or service l when it is not?
The picture is of two women who are breast cancer sufferers who have each lost one breast & the other unaffected breasts have had the nipple censored to remain within f$#%^^&** guidelines.
F********** allows photos’ of breast cancer survivors as long as no nipples are shown.

The advertisement also contains links to an article about the Body Image Movement: http://www.mamamia.com.au/social/taryn-brumfitt-sydney-skinny/ which is an organisation devoted to improving self body image & in no way is connected with adult products or services.

If F***^^&&%$ can prove to me it is an adult product or service I will not try to pursue this any further and will instead promote the item on Twitter or some other social media outlet with less restrictive policies.

Please paste the URL of the ad that wasn’t approved below: http://goo.gl/HTRGgM
Your Post wasn’t boosted because it violates F**********’s ad guidelines by advertising adult products or services, including toys, videos or sexual enhancement products. The post remains published, but it is not running as an ad”

The reply I got back was:

So this is a call to action to all non sexual nudity pages, not only Naturist or Nudist pages, we need all the breast feeding, artistic nudity, body painting, body image, or any other page that feels it has been mistreated to stand-up and demand to have the “Community Standards” changed!

I have been using the hashtag

The social network who must not be named must change!

on every post I make about censorship as well as using #freethenipple where appropriate, we really need to band together and get people talking!

PS: I have avoided naming the network as it doesn’t like negative articles about it, as well the shortened URL’s have the network in the link or go to that network… we may even be able to promote this article without them censoring it automatically 😉