I was interviewed about nude hiking/bushwalking for this article which was published in the Body+Soul health magazine supplement in the Australian Sunday Telegraph in September 2014 and circulated nationwide, it was also mentioned on the CH10 night time talk show The Project 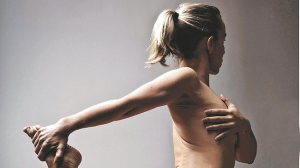 “THEY’RE hiking in the Aussie bush, swimming Sydney Harbour and doing the downward-facing dog in yoga studios. These intrepid fitness and adventure enthusiasts have joined a growing global trend of clothing-optional recreational pursuits. So what makes exercise in the nude so appealing? While supporters of the concept talk about feeling free and “at one with nature”, all of them stress that a less-dressed lifestyle has nothing to do with sex. “Being naked is emancipating,” Nigel Marsh, founder and organiser of the annual Sydney Skinny nude swimming event in Sydney Harbour, says. “It strips life back to its essentials, forces you to accept your real self and shake off the shackles modern society so often puts on us.” The Australian Naturist Federation agrees, saying: “Relaxing nude is more relaxing than being clothed, as you literally strip away all cares and pretensions of daily life.” READ MORE: http://www.news.com.au/lifestyle/fitness/charting-the-rise-of-nude-fitness/story-fnlsv23r-1227052992323